Into the Rising Sun

Download and Read Into the Rising Sun books, magazines and comics in our online library, in Pdf, ePUB and Audiobooks formats. Please press the "Download now" button so you can enter the library with your account, Register now (FREE). High speed download, no ads. Millions of people are satisfied with this service, update every day. 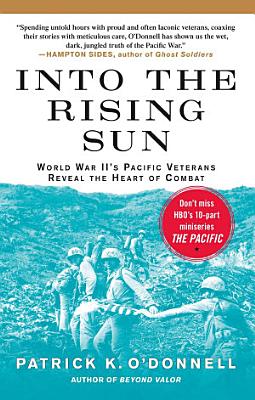 "Iwo Jima was a massacre. I never expected anything like that. People were dying left and right...No names should have been used on the flag raisings because we didn't get up there by ourselves. It was the collective actions of a lot of people and there were a lot of Raiders and paratroopers up there with us." -- Charles Lindberg, Flag Raiser Patrick O'Donnell has made a career of uncovering the hidden history of World War II by tracking down and interviewing its most elite troops: the Rangers, Airborne, Marines, and First Special Service Force, forerunners to America's Special Forces. These men saw the worst of the war's action, and most of them have been reluctant to talk about it. With O'Donnell's respectful coaxing, however, they first began telling their stories through www.thedropzone.org, his award-winning Web site. In 2001, veterans of the European Theater told their stories in O'Donnell's first book, Beyond Valor. Now, in Into the Rising Sun, O'Donnell presents scores of veterans' personal accounts, based on over a thousand interviews spanning the past ten years, to tell the story of the brutal Pacific war. "They were making a lot of noise, talking, yelling to one another, and I heard someone getting beat up on the left. I can still hear the screams. He was begging for mercy. They [the Japanese] were berating him. Later on I found that it was one of my friends, Ken Ritter." -- Robert Youngdeer, Guadalcanal These veterans were often the first in and the last out of every conflict, from Guadalcanal and Burma to the Philippines and the black sands of Iwo Jima. They faced a cruel enemy willing to try anything, including kamikaze flights and human-guided torpedoes. As O'Donnell explains in the Introduction, most of the men in this book were at first reticent to talk. Over the course of the war, they had spearheaded D-Day-sized beach assaults, encountered cannibalism, suffered friendly-fire incidents, and endured torture as pris-oners of war. Heroes among heroes, they include many recipients of the Navy Cross, the Distinguished Service Cross, the Silver Star, and other medals of battlefield valor, but none bragged about it. As one soldier put it, "When somebody gets decorated, it's because a lot of other men died." By at last telling their stories, these men present an unvarnished look at the war on the ground, a final gift from aging warriors who have already given so much. Only with these accounts can the true horror of the war in the Pacific be fully known. O'Donnell has carefully verified each account by comparing it with official records and interviews, and he intersperses each story with brief commentary. Together with detailed maps of each battle, the veterans' stories in Into the Rising Sun offer nothing less than a complete picture of the war in the Pacific, a ground-level view of some of history's most brutal combat.

Into the Rising Sun

"Iwo Jima was a massacre. I never expected anything like that. People were dying left and right...No names should have been used on the flag raisings because we

Solo into the Rising Sun

When we think about World War II bombers, we picture formations of scores of bombers, escorted and protected by fighters, flying into enemy territory and bombin

When their country calls, Texas Aggies go to war. From the Spanish-American War and World War I to Operation Iraqi Freedom, Aggies have been in the forefront of

In this book, Asian Diaspora and East-West Modernity, Sheng-mei Ma analyzes Asian, Asian diaspora, and Orientalist discourse and probes into the conjoinedness o

Following the attack on Pearl Harbor, the Japanese offensive in the Far East seemed unstoppable. Allied forces engaged in a futile attempt to halt their rapid a

Delve into the fascinating history of one of the South's greatest states withMississippi Secrets: Facts, Legends, and Folklore. Authors Dr. Gary D. and Ruth A.

Herodotus was an ancient Greek historian who lived in the fifth century BC (c.484 - 425 BC). He has been called the "Father of History", and was the first histo

Across the Wall: A Tale of the Abhorsen and Other Stories